I was really looking forward to seeing his show with orchestra!

I left my house early in the morning, traveled with my friend… we experienced something for the first time(ahaha)… and arrived in Tokyo! I checked in a hotel and went straight to National Museum of Western art to see an exhibition, “Le Corbusier and the Age of Purism”!!! …what(ahaha)? 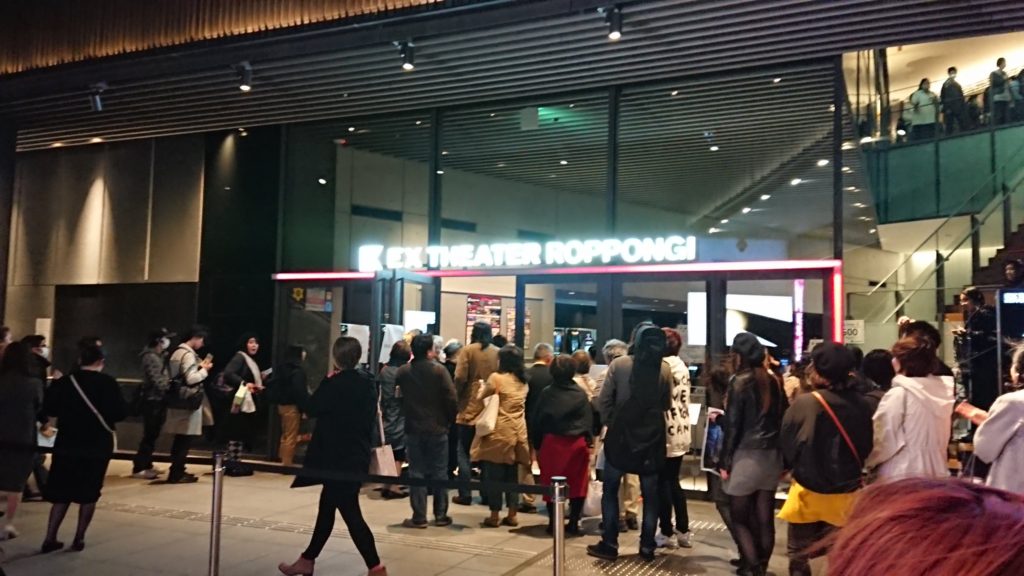 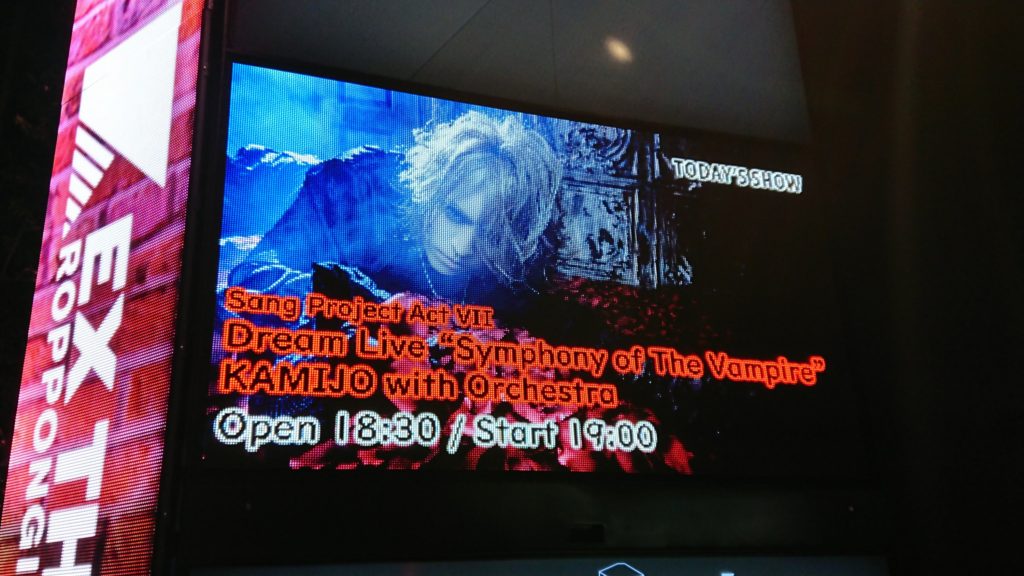 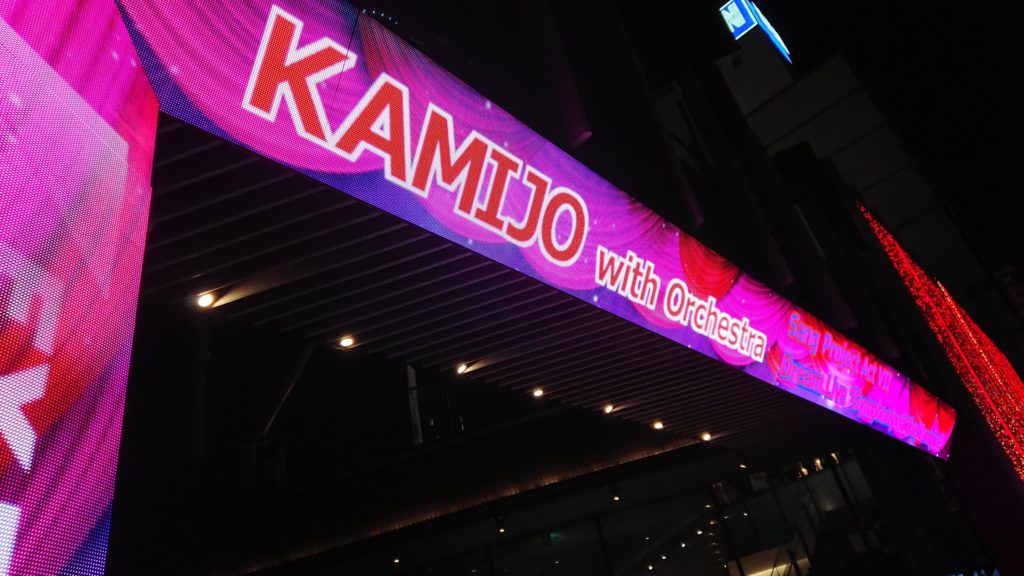 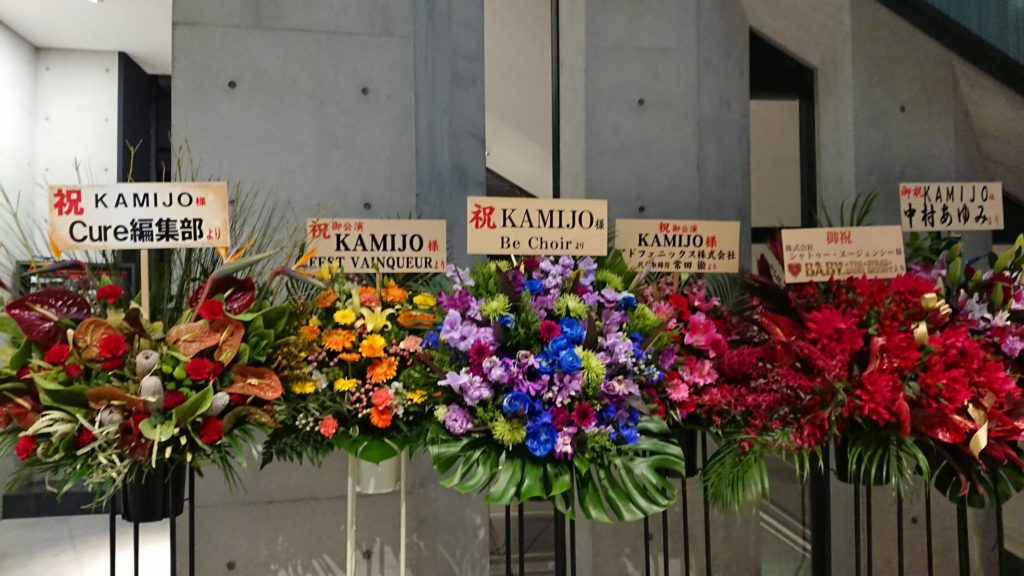 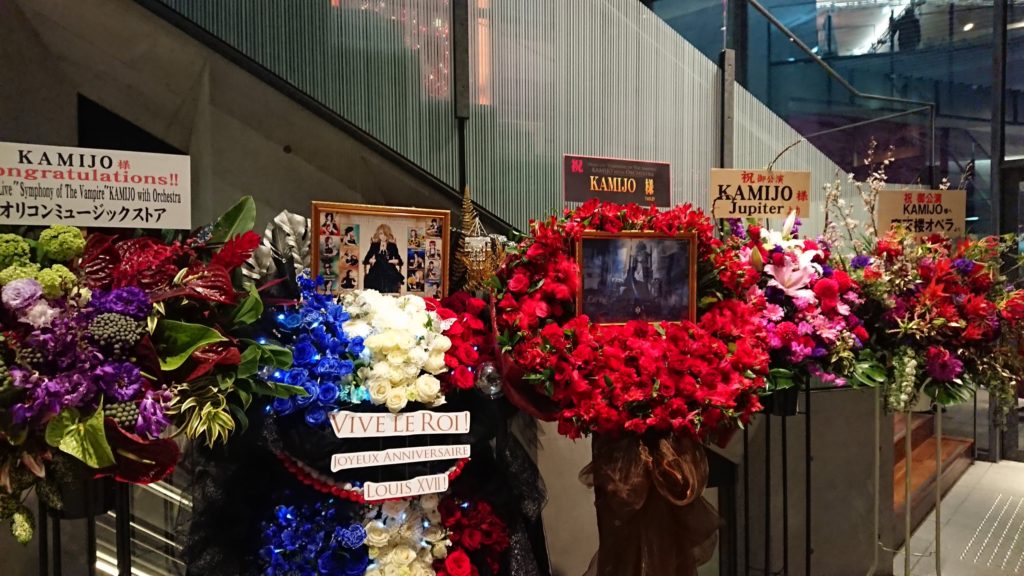 That’s how I arrived at the venue around when the doors opened. I’d heard the name of the venue, but it was my first visit☆ I talked with some of my friends at the lobby and went to my seat just before the show started… I was surprised to know that my seat was at the front row☆ …My ticket said, “row: B”! In addition, my seat was around the center. I can’t thank you enough☆

There was a bag which contained a rose light and a card, saying “Turn on the light after the main part of the show” put on the back of each chair. The color of the rose light was different depending on where the seat was.

On the other hand, there were some video and photo camera crews in front of me. They announced, “Today’s show is supposed to be filmed, so please remember you might be in the video.”

When I saw my watch, they were ten minutes behind the schedule. A few minutes later, the lights went out and the audience stood up.

The curtains were opened, and I found the members of the orchestra were on the stage. There was a footstool which is larger than usual… so close!!! KAMIJO in black appeared from the left side of the stage!

The last songs at the show in Osaka were those two songs, so I felt that show was following the tour. I like it!!! The sound was really heavy. YUKI-kun was on an elevated platform placed above and back of the main stage and surrounded by transparent boards… to block the sound? Unfortunately, I was just below the stage, and camera crews were always came and went, so I couldn’t see the orchestra members well.

He said like that “Welcome to my dream land.” and “We’ll perform a song which is suitable for the concert with an orchestra.” …Sorry in advance. I was just enjoying the live show, so I can’t remember the detail. Please check it out in the DVD or something later.

It was really good!!! The collaboration of his songs and classical music is amazing! By the way, I saw the people at the same row, many of them were holding their lighted rose lights, so I did the same thing… In Nagoya, my rose light went off soon because I was shaking too hard, I think. That’s why I treated it in a careful way(ahaha). In addition, I didn’t know what color I should choose… finally, I chose blue as usual☆

There was a religious painting or something on the wall of the back of the stage. There was no screen. On the other hand, lighting was really effective. During a guitar solo, I saw Meku-chan was surrounded by beautiful light. He looked so cool☆ Especially, red light was beautiful. And they looked comfortable because the stage was larger than usual.

“We’ll play a series of songs we’ve performed for a year.” …Oh, no. I don’t remember what he said exactly… I usually remember though(ahaha).

After Sand II, KAMIJO-kun and his support members left the stage. Sang III was performed by orchestra only.

“When I write a song, I sometimes imagine not my voice but the sound of orchestra.” ←He might have said at a different part of the show. “Now, we’ll perform a symphony which is 30 minutes long.”

At last, I could listen to it all the way through♪ Not only KAMIJO-kun’s dream but also mine had come true. Especially, I liked “Dying Table” because the balance of the sound of orchestra and band was really good. It was very heavy, exciting and interesting♪ And the violin at the intro of “Sonata” was played in front of us, which was impressive☆ I felt so good when “Throne” was over♪

It was awesome!!! Then the members left the stage… only Meku-chan came and went from the right side of the stage …not to cross the stage?

That’s how, there was a silence… silence…

I already wrote, “When the main part of the show, please turn on the light.” but I didn’t know when to start to light. The members of the orchestra were still there, and it was dark. I thought an encore would start soon, but I didn’t know what to do and looked around. Then I heard “Vive le Roi!” from next to me, so I began to cry as well. And I changed the color of my rose light into white.

After a while, KAMIJO-kun in white appeared.

“Today is Louis XVII, Louis Charles’s birthday. To celebrate his birthday, please turn on your rose light.” …If we had switched on the same color as that of petals, the venue would have shined like a French flag. But some people who were supposed to switch on “white” made a mistake. KAMIJO-kun said, “It’s rather blue.” or “I’ll wait until you change into the right color.” and waited for a while.

And we celebrated Louis Charles’s 234th birthday. “I think he didn’t imagine that we would celebrate his birthday in Japan. Bon anniversary!” said KAMIJO-kun… What? French and English were mixed(ahaha)? But he said twice, so I think he didn’t mistake, but said by intention(ahaha)☆

…Actually, my birthday was the day before, so I had wanted to be celebrated with him. But I was too worried about “Bon anniversary,” so I forgot it(ahaha).

He said, “Even if the soul is departed…” …what??? …Then he began to speak again, “Even if the body is dead, the soul will never die.” Oh, he made a mistake… I guess he was excited or nervous because his dream came true… “I’m happy my dream has an overlap with his.”

…The lyrics are good☆ …I think the lights of rose lights were so beautiful☆ …I’m looking forward to seeing the view in the video.

The final song was “Louis.” The show was amazing, and I felt happy～.

After the song, KAMIJO-kun said, “I’d like to have a show with an orchestra over and over. I hope I can usually perform in this style.” Then he announced his next tour in summer. “I’ll perform for two days in local cities!” …I knew it(ahaha).

And then, he introduced the violinist he had asked for his concert with an orchestra. He said, “Orchestra master, Crusher Kimura-san!” …He should have said, “Concert master” …He was too excited(ahaha).

By the way, YUKI-kun came to the front of the stage and bowed with MASASHI-kun, holding his hands in front of his body. Then, he turned to Meku-chan and tried to do the same thing… but Meku-chan didn’t notice it(ahaha). YUKI-kun didn’t look disappointed… he had expected the circumstances, I think(ahaha).

Oh, I haven’t written about MASASHI-kun at all. His hairstyle is quieter than before. And it was the last show for Anzi-san, but KAMIJO-kun didn’t say anything about it as he had said in Osaka.

My seat was located where it was off-center, in other words, KAMIJO-kun or MASASHI-kun stepped forward. That’s why I could see them very much even though camera crews sometimes blocked my view. I appreciate my friend’s luck☆

Finally, I held hands with people both sides of me and jumped!!! I had a very good time! Congratulations on his show!!!

After the show, I went to Meet & Greet.

I was very impressed with his show, so I was almost crying when I talked with him. I told him that I was glad I could finally listen to SoTV all the way through, and Dying Table was interesting! And he said, “Come visit me again.”☆

Well, the show was really good!!! I’m glad to see it!!! I love rock music and classical music, so I have seen some collaboration between a band and an orchestra, but the sound of KAMIJO’s show was the heaviest. They fit together well♪ 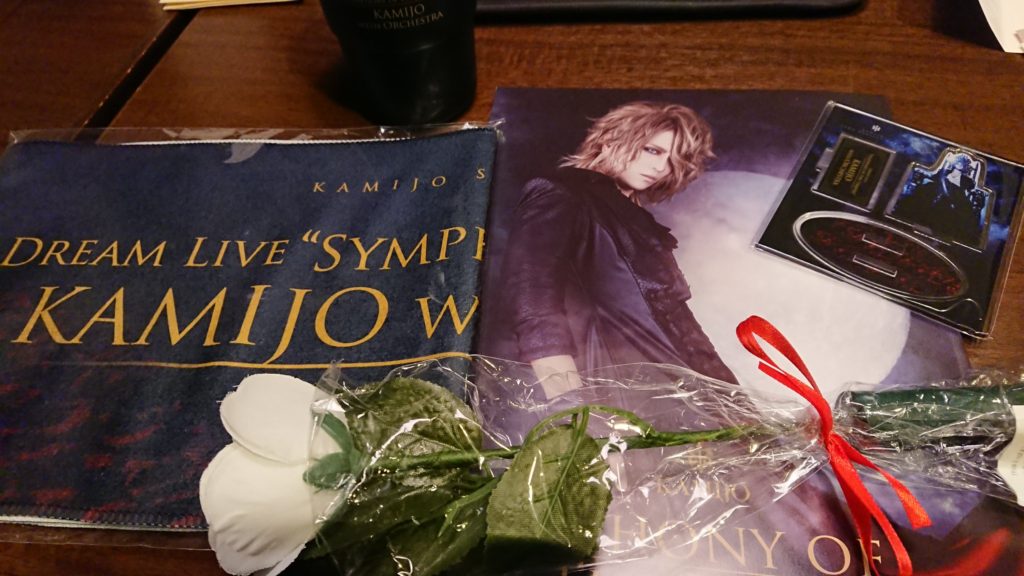