Even though it’s the end of March, it’s still cold. When I went to the station, cars were covered with snow in the parking lot(cold).

Be that as it may, it was a sunny day as usual. I wrote my live report of the live show in Nagoya on the way to Osaka.

The same as last year, we visited “melcafe,” which held “KAMIJO Collaboration Cafe.” KAMIJO’s video messages before the show and after the show were different. 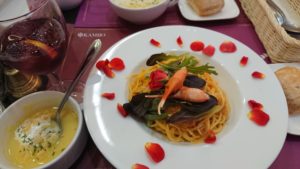 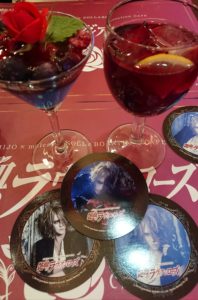 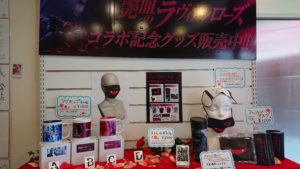 Before the show, he said in the video, “You’re very good because you came here before the show!”(funny) …According to my friend, the messages before that day were all serious, so it was very rare(ahaha).

The taste was normal…

The we walked to the venue, had a “Classic Tiramisu Frappuccino” at Starbucks… it was really good! then went back to the venue. 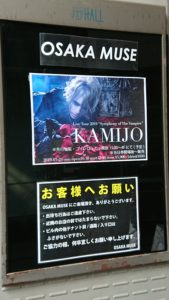 Thanks to my friend, we were nearer to the stage than the day before! …She always invites me to go to his live show at just the right time(ahaha).

And I thought again… I feel happy that I can get a memorial paper ticket. But I would be glad if they gave it to me after the show because it is too big to put into my bag and it might bend during the show.

It was time to start. The curtains were open and Napoleon began a voice training. After “Oui!” and “Bonjour!”…

Napoleon: Osaka! (Audience: Osaka!) …I like leopard-print pattern. If I should be born again, I would want to be born in Osaka.

Really(ahaha)? Then we call “KAMIJO” and the show started. I already remembered enough the day before, so I think I can write some report about the show(ahaha).

KAMIJO was in black. At the end, he sang the wrong lyrics, didn’t he?

KAMIJO-kun, MASASHI-kun and Anzi-san were playing, swiging from side to side, but Meku-chan wasn’t. By the way, MASASHI-kun’s hair was different from the day before!… Seeing is believing, so I quote the posts on twitter.

Then, the story was told that it was peace before the revolution…

In Nagoya, I hesitated a little to jump high because I hadn’t joined his live for a long time, but in Osaka, I could did it from the beginning!!!

Stories were told between the songs. I could concentrate in the story more deeply than the day before. I didn’t think that the world of “Symphony of The Vampire” has such profound implications…. but I still don’t know it well, so I won’t write about it in detail.

Probably, when he sang “Emigre,” he held his pendant in his mouth at the intro, then released it and began to sing.

At the beginning, he turned around, with his hem of the costume held. At the bridge, we could enjoy MASASHI-kun’s playing♪ At the end, KAMIJO-kun had a fan at the first row give his Blue Rose Light to him, sang for a while, holding it, then kissed it, and returned it to him.

KAMIJO brought a towel and whirled it above his head, but we were busy doing headbanging and so on(ahaha).

He incited us less than in Nagoya… Were we already excited enough? I didn’t know the situation behind me. The shape of the stage in OSAKA MUSE is like 凸(convex) and, the distance between the stage and the fence in front of the audience is a little far. He put his foot on the fence only twice, I think. And I remembered he came to the front of the stage many more often(ahaha).

The story was told, “I can’t hear!” …”I advised you to be careful not to be addicted to a woman alive.” …”You should such blood.” …”Beautiful melodies become an alternative to blood”

“Thanks to the progress of medicine, the fact will be revealed”… “Finally, a research showed that the heart of Louis XVII was real one”…

It was different the day before that the sound of the rain didn’t disturb me. But I felt “Unmei” itself disturb the sense of speed of “Throne.” I don’t like it. At the same time, I got to know the audience in Osaka is quieter than in Nagoya. Anyway, I didn’t feel refreshed.

I read the song was performed at other venue. I was glad to hear the song because I love it♪

I wish he had incited us more! I was pushed just a little. I felt the audience in Osaka was quieter!!! …A piece of sequin was dropped off the costume and sticked to his right arm.

He announced that Anzi-san will be away from his project after the next concert. Originally, he had thought he would announce it at an event but it was cancelled, and when he announce it on 27th, the “dream live” will be an end sadly, so he decided to do it on that day. There were lot of Anzi-san’s fans at the left side of the venue, so they looked very sad. He hopes Anzi-san will join him again if he asks.

KAMIJO: Do you want to see Anzi swinging his hip? Moulin Rouge.

At the intro, Anzi-san turned around and swung his hip. During the song, Anzi-san and MASASHI-kun was playing, walking around in circles as well as the day before, but KAMIJO-kun didn’t join them(ahaha).

KAMIJO: Today’s live is the final of this tour. We’ll have a classical concert, but a show with voice actors comes to an end. In the classical live concert, my dream will come true, so I hope you’ll come to see it though Tokyo is a little far from Osaka. That’s how, we’ll perform this song on the last day of this tour! Theme of Sang.

At the beginning, he held out his microphone to us… I’m sorry I didn’t memorize the lyrics correctly.

Every time I listen to “Sang,” I think the order of “Theme of Sang” and “Nosferatu” is perfect!!! Actually, I don’t like all of his songs… it depends on my mood, but I sometimes think he is a composer who writes extraordinary songs. I like the speed of songs.

That’s how, the live show was over! I hold hands with next people and jumped together! At the end, Napoleon told us to write about songs they performed on that day or our impressions a lot. That’s why I read this live report(ahaha).

On that day, there wasn’t a cheki shooting session, so I received a drink and was leaving the venue with my friends… but the line didn’t move… Why? What’s happening? So I talked with other fans or got a present… Finally, we began to walk to the exit and I found.

KAMIJO was just outside of the door!!! Wow!!!

He was waiting for us, as if he did an arm wrestling match or something(ahaha), and we shook hands. He said, “Thank you so much.” and I replied, “It was very good!”♪

I was too satisfied with the show. They performed many songs I had wanted to hear.

Then, we visited “melcafe” again. 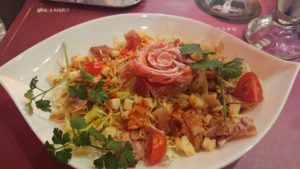 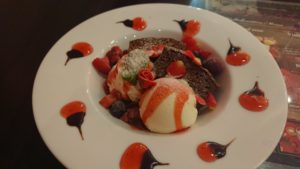 I forgot to take a photo of a drink… I had little time but we had all of the collaboration menu(ahaha). His video message was really serious. “Thank you for visiting, and working for me. I hope to see you at the Dream Live.” like that.

I really enjoyed the shows for two days. Music is wonderful♪

But the next day, I felt really sick… I got a cold and migraine… but I feel better thanks to some medicine.

I finished writing live reports in Japanese and in English, so I’ll prepare for the next show!!!