It’s been a long time! I graduated from university two years ago, but I couldn’t get out of depression because I had worked too hard… Only recently, I feel better.

I went to see KAMIJO-kun’s live show for the first time in a year. Originally, I thought I would plan to take holidays in March, then the classic concert was announced! In addition, his live shows in Nagoya and Osaka were held in the same week… Nagoya and Osaka are near to my house… so I decided to go there. Above all I love “Symphony of the Vampire!”

…But, I’m usually too tired on the first day of my holidays. I couldn’t get up and was almost late for the live show…

Fortunately, I arrived in Nagoya! I hadn’t visited the venue, ell FITS ALL, so I didn’t remember how to get there(ahaha)… even though my friend often visit there(ahaha). But we arrived there in time, and waited for the show, talking with my old friends. 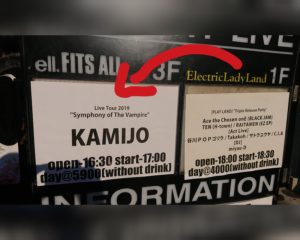 Attention… This is not a live report but my impression for the live show. I hadn’t joined his live shows so often, so I naturally remembered old memories. You can skip those parts(ahaha). Don’t ask for the details because I’m in rehabilitation(ahaha).

The lights went out, and Napoleon Bonaparte (Voice actor: SUGITA Tomokazu) was shown on the mirror shaped viewer in the back of the stage. He asked us to practice to cry.

Napoleon:
When you reply, say “Oui!” …crisply!
When you greet, say “Bonjour!”
Next, you are in “Na go ya!” …Sugita-san said too crisply(ahaha).
At the end, say the word which means “King” in French, KAMIJO! …that’s funny(ahaha).

From the right side of the stage, support members and KAMIJO in white appeared. I hadn’t seen MASASHI-kun for a long time!!! …I saw them from a little left side of the center.

I love it!!! The opening of SoTV makes me feel upbeat!!! Listening to it, I remembered that it was released in March, I took holidays and I joined some of the instore events. I firstly took part in the event in Nagoya as well… I was too tired(oh, no), but then I came to recover my strength. That’s why SoTV is the best song for my rehabilitation(ahaha).

When I listen to it, I remember “Tokyo Kinema Club” and a building called “Bastille in Mita” which is in my university. In short, Bastille made me remember Tokyo(ahaha)?

They are from “Sang.” On that day, I just enjoyed the songs rather than the world of the story. I was in a little leftward to see MASASHI-kun, but watched KAMIJO-kun more often because I hadn’t seen him as well.

I hadn’t listened to it for a long time… Actually, I couldn’t remember the title during the live show, and I managed to remember it.

We use “Blue Rose Light.” But soon my one went out… because I waved it?

By the time, I felt happy. Live houses are small… I don’t like a small place, but I don’t know why I felt spacious world. It was comfortable☆

And, KAMIJO-kun put his foot on the fence in front of the audience. He incited us many times.

I was happy because Anzi-san was there! I don’t know why I felt nostalgic.

In any case, I really love SoTV, so I feel fresh when the song was over… But I hadn’t joined his live show so often and the timing was bad for me, and I’ve never listened to the song all the way through… no, I have listened to it once? …I can’t remember.

After the song, support members left the stage… I was a little surprised that they left so quickly. Then “Sang -Kimi ni Okuru Namae-” was played, end-title credit of the members and voice actors was displayed and the light went on. Finally, they came back to the stage. The direction of the stage was amazing☆

According to my friend, it was the first performance in the tour. After all, I never listen to “Heart” without remembering Tokyo Kinema Club. I felt nostalgic again.

I remembered his white military uniform☆

At the beginning of the song, MASASHI-kun came to the front of the stage and played his bass, which looked cool☆ During the song, at the lefft side of the stage, MASASHI-kun and Anzi-san were playing, walking around in circles then KAMIJO-kun joined them! They all looked pleasantly☆

KAMIJO: Nagoya is the best! If I hear more your voices, I’ll perform for two days next time! (Audience: cheers) OK! I will do for two days!!!

…Really(ahaha)? After the show, I asked my friend about that, she replied, “I think the schedule was already fixed.” in a cool voice(ahaha).

KAMIJO: This tour has been enriched, and today we are on the top…

…Wait, you mean tomorrow’s live will turn down!?

KAMIJO: Tomorrow’s live in Osaka will be exciting as much as today. (←He made the course correction(ahaha)) Osaka is hard to beat! Your power is that much?

All of us got excited…

KAMIJO put his foot on he fence in front of the audience, leaned toward us, held out his microphone to us, and let a fan sing. Many of us gathered to the stage and got excited. KAMIJO said many times, “Jump! Jump! Jump! Jump!” like hide-san.

After the song, he introduced his support members and at the end…

KAMIJO: Who likes eel? (Note: eel and rice, Hitsumabushi, is a specialty in Nagoya)
Audience: KAMIJO!!!

We held hands with the next people and jumped! The show was over. I had a very good time! I felt refreshed.

As I recall, at the end of a song, they couldn’t finish it well. But YUKI-kun and KAMIJO-kun made eye contact and finished it smoothly. I couldn’t see Meku-chan well because he was always at the right side of the stage.

I bought some tour goods… but half of them were already sold out, so I didn’t know which to buy(oh, no). Then we joined in a line to a cheki shooting session. I saw other fan’s shooting to know the procedure.

Finally, it was my turn. Unusually, I almost went blank(ahaha).

Shizk: I came to see your live show for the first time in a few years!
KAMIJO: Seriously!

… He really remembered me(ahaha)? But many many years had passed… When did I talk with him last time? When I had said to him, “I’ll concentrate on my study”?… When he wrote this? ↓ 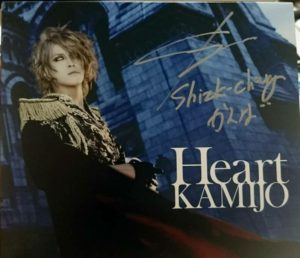 I checked my old blog and found, it was in November in 2014(ahaha). I haven’t talked with him for four and a half years! That’s why, I told him that I graduated from university… and asked him to celebrate my birthday☆

…Every time he said “Congratulations, ” he shook hands strongly… so cute(ahaha)☆

…At the same time, I was surprised that he became a service-minded person(ahaha).

When I leave the venue, I took a photo of signed poster on the door. 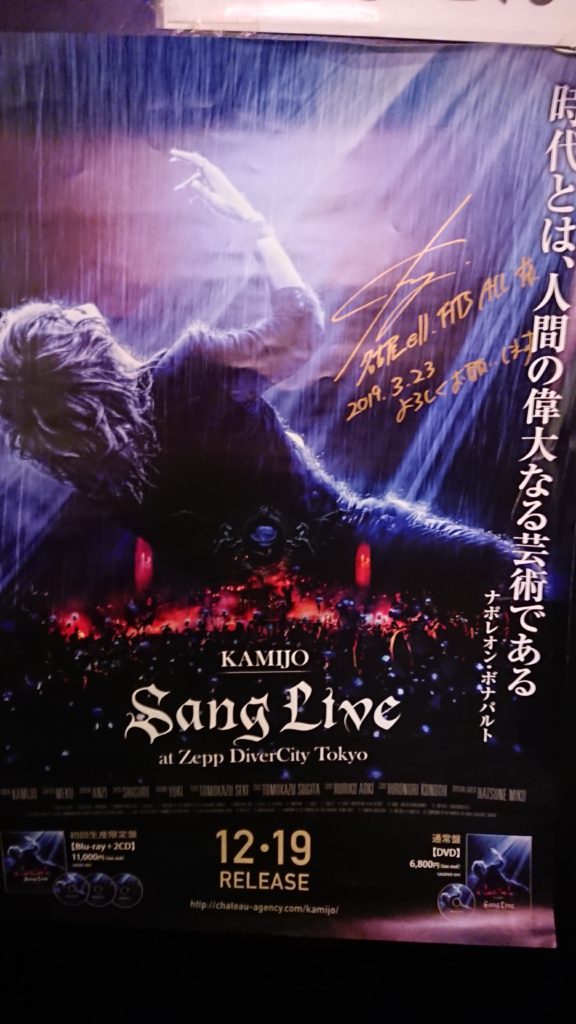 The show began at 17:00, so we had time before our train left. We visited a restaurant to have a grilled eel rice bowl. 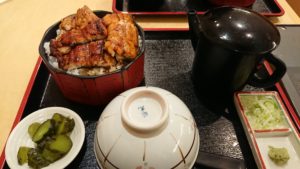 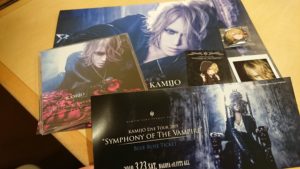 We can enjoy in three ways. First, I ate just as it is, then had the eel with green onion and “wasabi”, at the end, poured broth over the eel and rice and enjoyed it. It was better when I ate it with wasabi. I suggested to my friend posting the photo of eel to KAMIJO-kun, but she turned it down… because I made him angry last time(ahaha).
That is how, I had a very good time! But, at the same time, I felt pretty tired… because I exercise too little, so I went to bed early for the next day…